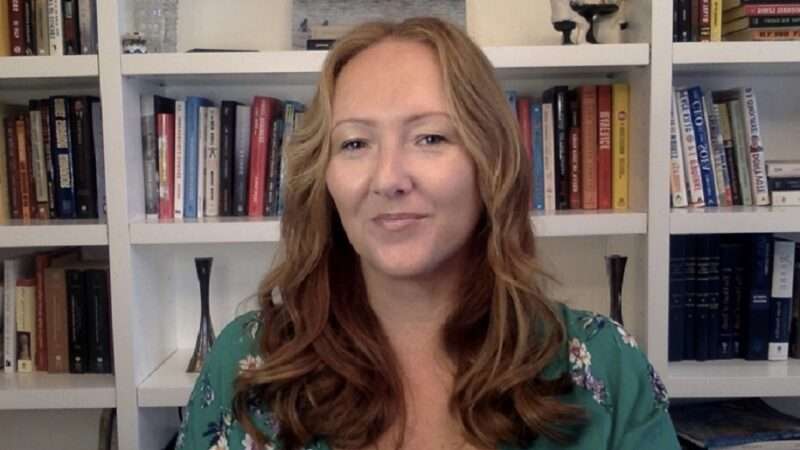 "I am leaving New York City for Florida." wrote self-confessed "New York supremacist" and New York Post columnist Karol Markowicz in a widely circulated article for Fox News. She's not happy about it, but she's also not apologizing. What drove her out of the city she and her husband called home for decades was the arbitrary and capricious treatment of students, including her three young children, stuck in public K-12 schools during the pandemic. She's vamoosing "because they took away school during the pandemic and not enough of my fellow New Yorkers cared. I kept looking around at a civilization that does not value education. Or worse, values it for their own kids, in the form of private pods or putting them into open private schools, but won't fight for their less fortunate neighbors to have the same."

Markowicz is not alone. In 2020, some 320,000 people left New York City. Her family's destination is Florida, where the cost of living is cheaper and the schools—and just about everything else—have stayed open during much of the past two years.

Her story is representative of a large swath of refugees leaving big-population blue states for places like Texas and Florida. For the first in recorded history, California lost people year over year and a congressional seat. The Florida Department of Highway Safety and Motor Vehicles reported that "51,108 New Yorkers moved to Florida between April 2020 and April 2021." The Sunshine State surpassed New York in population in 2014 and over the course of the decade between 2010 and 2020, it gained 14.6 percent in residents while New York scratched out a gain of just 4.2 percent, well below U.S. growth of 7.4 percent. The gap between the two states continues to grow, with Florida boasting 21.8 million people and New York at 19.8 million people in the latest Census data.

"It's ridiculous to live anywhere else," Markowicz tells Nick Gillespie. "But it turns out that the city hates children and I can't be a part of that anymore."

7d ago0w ago
Subscribe
Unsubscribe
Щотижня
Every Monday, the libertarian editors of the magazine of “Free Minds and Free Markets”—Matt Welch, Nick Gillespie, Katherine Mangu-Ward, and Peter Suderman—discuss and debate the week’s biggest stories and what fresh hell awaits us all.
T
The More Perfect Union

3d ago3d ago
Subscribe
Unsubscribe
Щотижня+
A business and current events podcast for anyone looking to gain more freedom and autonomy through entrepreneurship. Art, culture, politics, technology and more. This show gives you the insights you won't find anywhere else. If you want to know what's going to happen tomorrow, listen to this show today.
P
Payne's Politics

3d ago3d ago
Subscribe
Unsubscribe
Щотижня
Sebastian Payne takes you into the corridors of power to unwrap, analyse and debate British politics with a regular lineup of expert Financial Times correspondents and informed commentators. New episodes available every Saturday morning. See acast.com/privacy for privacy and opt-out information.
T
The Wilderness

7M ago31w ago
Subscribe
Unsubscribe
Щомісяця
What will it take to defeat Donald Trump in November? In season 2 of The Wilderness, Jon Favreau looks for the path to victory in 2020 by talking to voters, strategists, organizers, and candidates in the battleground states that will decide the election.
F
Face the Nation on the Radio

21h ago21h ago
Subscribe
Unsubscribe
Щотижня
Margaret Brennan asks the biggest guests the smartest questions. Hear official Washington on the firing line, on your schedule.
P
Pod Save the People

6d ago6d ago
Subscribe
Unsubscribe
Щотижня
Organizer and activist DeRay Mckesson explores news, culture, social justice, and politics with analysis from Kaya Henderson, De’Ara Balenger, and others. Then he sits down for deep conversations with experts, influencers, and diverse local and national leaders. New episodes every Tuesday.
T
The Skepticrat

3h ago3h ago
Subscribe
Unsubscribe
Щодня
Wake-up with America's first news - Host Gordon Deal goes beyond the headlines with the day's first look at news and business news from the U.S. and around the world; bringing a lively blend of intelligent information, humor, and expert analysis to morning radio.
O
OPB Politics Now