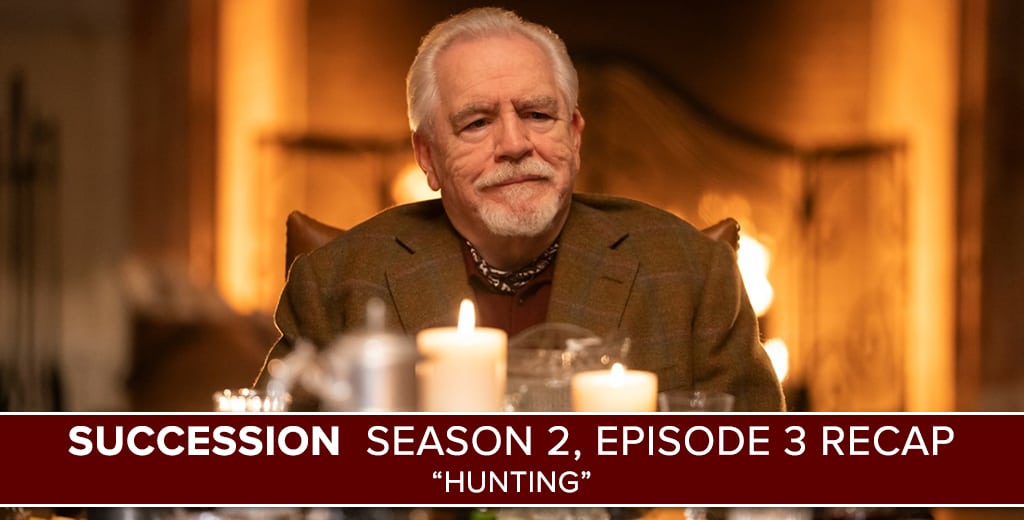 Josh Wigler (@roundhoward) and Emily Fox (@emelette) go on the record with their thoughts about Succession season two, episode three: “Hunting.”
In “Hunting,” Logan Roy (Brian Cox) announces his plans to combat his rivals: buy up PGM, a massive media conglomerate that stands diametrically opposed to the Waystar Royco worldview. Logan’s inner circle protests the strategy, but ever so quietly, delegating the responsibility to stand up and speak out against the plot like a game of hot potato. In no time at all, a different game emerges: “Boar on the Floor,” an improvised witch hunt in which Logan attempts to ferret out the traitors in his midst — separating the wheat from the chaff, or the snakes from the morons, as it were. In the process, Kendall Roy (Jeremy Strong) outs brother Roman (Rory Culkin) for trying to broker the PGM deal behind Logan’s back, thereby inadvertently putting a huge thorn in the deal’s side.
Back in New York, Shiv (Sarah Snook) is charged with speaking to elder half-brother Connor (Alan Ruck) about his desire to run for President of the United States — an embarrassing notion all on its own, but potentially a detrimental one to the Waystar Royco universe. All the while, she’s attempting to remote-control husband Tom (Matthew Macfadyen) into thwarting the PGM buy-out, referring to him as her “meat puppet.” Tom is not only displeased at the notion, but outright bad at the operation, leading to his placement as one of the many boars on the floor — right alongside Cousin Greg (Nicholas Braun), already in the thick of a panic attack due to his role in speaking with someone writing a tell-all biography about Logan Roy.
Josh and Emily weigh in on all of that and more, and dig into your feedback as well. Make sure to send feedback every week to @PostShowRecaps.

Created by Jesse Armstrong for HBO, Succession focuses on the Roy family, rich and powerful monsters with their hands on the wheel of an enormous media empire. Logan Roy (Brian Cox) is the patriarch who built the empire, brick by brick, but in his aging and ailing state, it’s time for him to consider the line of succession. He has four children to choose from, all of whom are problematic for their own litany of reasons: Kendall (Jeremy Strong), Logan’s drug-addicted “number one boy”; Roman (Rory Culkin), a jester in a power suit; Shiv (Sarah Snook), a political animal who is on the fringes of the family business; and Connor (Alan Ruck), the eldest sibling with no apparent appetite for the job. Dark horses like Tom Wamsgans (Matthew Macfadyen) are jockeying for the job, while inside-outsiders like Cousin Greg (Nicholas Bran) want nothing more than to scrape on by as best as they can. But of all the candidates to rule Waystar Royco, there is only one leading candidate in Logan’s decaying mind: himself.

7m ago7m ago
Subscribe
Unsubscribe
Щотижня
Buckle up! Entertainment Weekly's BINGE Podcast is taking you through The Fast & Furious films a quarter mile at a time, with the stars who brought them to life. Hosted by EW Social Media Director Chanelle Johnson and EW Associate Editor Derek Lawrence, the series gives fans an in-depth look at the making of the ride-or-die franchise through exclusive interviews with the whole Fast Family — from director Justin Lin to stars Sung Kang, Michelle Rodriguez, and Dominic Toretto himself, Vin Dies ...
S
Soundtracking with Edith Bowman

24m ago24m ago
Subscribe
Unsubscribe
Щотижня
In a unique weekly podcast, Edith Bowman sits down with a variety of film directors, actors, producers and composers to talk about the music that inspired them and how they use music in their films, from their current release to key moments in their career. The music chosen by our guests is woven into the interview and used alongside clips from their films. https://twitter.com/soundtrackinguk https://www.facebook.com/Soundtrackingwithedithbowman/ https://play.spotify.com/user/soundtrackingwi ...
D
DumTeeDum - A show about The BBC's The Archers

3d ago3d ago
Subscribe
Unsubscribe
Щотижня
DumTeeDum is a weekly podcast about The Archers that features Roifield Brown and fans of the Archers.
Y
You Must Remember This

2d ago2d ago
Subscribe
Unsubscribe
Щомісяця
You Must Remember This is a storytelling podcast exploring the secret and/or forgotten histories of Hollywood’s first century. It’s the brainchild and passion project of Karina Longworth (founder of Cinematical.com, former film critic for LA Weekly), who writes, narrates, records and edits each episode. It is a heavily-researched work of creative nonfiction: navigating through conflicting reports, mythology, and institutionalized spin, Karina tries to sort out what really happened behind the ...
B
Binge Mode: Marvel

28m ago28m ago
Subscribe
Unsubscribe
Щотижня+
We see The Sci-Fi Christian, in all its iterations, as being about the collision between faith and nerdom. We believe that good genre fiction is about more than just entertainment. We seek to engage with the themes and philosophies behind our favorite stories, wrestling with the big ideas within speculative fiction. We’re unabashedly nerdy and unabashedly Christian. Even if your faith background differs from ours, we look forward to interacting with you at The Sci-Fi Christian!
B
Bald Move Pulp

10h ago10h ago
Subscribe
Unsubscribe
Щотижня+
Bald Move Pulp is where you can get your fix of robots, aliens, action space adventures, and everything in between; on television or on the big screen. Pulp was not made for serious drama, if that’s your thing, you might be looking for Bald Move Prestige.
G
Game of Thrones The Podcast

1d ago1d ago
Subscribe
Unsubscribe
Щомісяця
Jim and A.Ron review each week's episode of HBO's Game of Thrones and your feedback.
T
The Talking Dead - A podcast dedicated to the AMC TV series The Walking Dead